Parenting In the Digital Age

As an IT professional with years of experience I feel like I have a pretty good grasp of technology.  As a dad with three kids I feel like my grasp of parenting is less firm, but that is a topic for another day.  I have always been the one my kids come to when their laptops weren’t behaving, or their tablets couldn’t connect to the internet, or their phones couldn’t download an app, or the latest Xbox update wasn’t downloading…….you get the idea.  In my opinion, my kids have benefitted greatly from my technical skills.  I’m sure that statement would draw multiple eye rolls from my kids but it’s the truth.  Unfortunately for my kids, my expertise in technology can be a double-edged sword for them.  I know how to turn off wifi for a misbehaving child by blocking their device’s MAC address on our router and I know how to monitor their digital footprint on the internet. I take advantage of location services to verify they are where they said they would be and when they said they would be. So my technical expertise can also be annoying to them.  The following is one of those annoying, if not entertaining, times.

Are your kids like mine? Do they treat their mobile phone as a one-way communication device? It seems to work perfectly when they need to get a hold of you during a business meeting or when they want to know if a friend can sleep over. But when you need to reach them it seems like their ringer is turned off, or their fingers are incapable of returning a text.  This story is about one of those times and how I used technology to get my son to respond.  The story is a few years old but our family (at least 80% of it) still laughs every time we mention it.

It was a typical Saturday during another softball summer for our twin daughters.  We spent several years driving them around the country from softball diamond to softball diamond as they followed their love of the sport with school teams as well as a high level club team.  After a few years, our son Owen had had his fill of softball diamonds.  He informed us that he would prefer to say home whenever that was an option so this particular Saturday we gave him that option.  We were playing in a city that was only an  hour away so we told him he could stay home for the first part of the day and as we figured out the schedule for the afternoon/evening we would contact him and let him know our plans.  If the girls were done early enough in the day, he wouldn’t have to come at all. But if they were going to play some night games we weren’t comfortable leaving him home alone at night and would need to pick him up.  He agreed to stay in contact with us so we left him home alone as we headed to the ball diamonds at 7am.

The problem occurred later that afternoon when we found out that the twins would be playing a 7pm game.  That meant I was going to have to drive home between games and pick him up which would be a little over 2 hours round trip.  Luckily my mom had offered to pick Owen up if he could be ready in time because she was going out to dinner and invited him along to dinner and then to hang out at her house until we got back to town.  I wasn’t sure which option Owen would choose but I knew that whichever one I chose on his behalf would be wrong so I needed his input.  This is where that one-way communication device became an issue.

I started with a simple text. “Hey! You there?” After about 10 minutes without a response, I sent a few more question mark texts.  Then one that said “Nana wants to know if you would rather go out to dinner with her or come to the game tonight.  I need an answer soon or I’m going to have to drive home and get you.”  Still no response.  My wife, the twins, and I were in the van sitting in the parking lot with the AC running so the twins could cool off in between games when my wife suggests I try calling him.  I laugh because I know how infrequently my kids answer their phones, but I humored her and tried anyway.  Of course it goes to voice mail after a few rings.  I leave a message that I know will never be listened to and I try a few more times unsuccessfully.  Then my wife suggests I try the home phone (yes, we still have one…lol).  Same result after multiple attempts. Unfortunately, at this age his phone was not a vital part of his social interaction so most of the time it was left uncharged and sometimes even turned off (gasp!).  This is when I put on my tech hat and figured out a way to get his attention.

We have lots of TVs in our house, and every TV is a smart TV.  Some might not have started out smart, but I found an old laptop that I could connect to the “dumb” ones so that they could be online for watching Netflix and YouTube etc.  I had an app on my phone that allowed me to remote in to any PC on my home network or allowed me to remote in to my router.  I had two ideas on how I could get Owen to respond to me.  The first was to login to the router and disconnect his Xbox, and the second was a little more sinister (and fun).  The Xbox disconnect was going to take longer and wasn’t guaranteed to work.  If he was playing Xbox and he got kicked offline, he would fiddle with it for a bit before he would reach out to me complaining that it wasn’t working and ask for my help.  I didn’t have much time to get back to my mom with an answer.  The other problem was what if he wasn’t playing Xbox and was doing something like (gasp!) reading a book or something? Then he wouldn’t reach out at all.  I had to go with Plan B.

I logged in to the remote app and hopped on the PC attached to our TV in the family room.  I was in luck, the TV was on and set to the correct input.  I then turned on the webcam that had a pretty good view of the family room and some of the kitchen.  This would be important so that I could monitor the execution of Plan B.  The final part of the plan was to crank up the volume on the TV to max, and then find an appropriate YouTube video that was playing an alarm siren.  I figured that even though his bedroom was on the second floor, I had the family room PC/TV combo connected to a 7 speaker surround sound stereo system in the family room and I was confident that I could get his attention at maximum volume.  The other benefit of this plan is that I knew the dog would help alert him if for some reason he was wearing headphones with music cranked up. 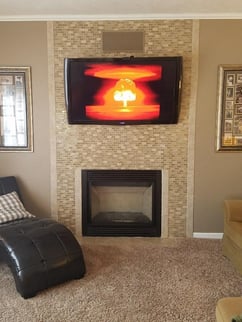 Here is a pic of my family room TV.  Notice the tiny webcam on top and one of the 7 in-wall speakers above the TV.  Also notice the youtube video playing the warning siren video.

So the stage was set.  All I had to do was press play on the YouTube video and with the webcam, the rest of the family could watch Owen’s reaction as he came into the family room.  Ignoring my wife’s last minute reservations about the anxiety this would cause in our son, I pushed play and switched to the webcam to grab a few pics of his reaction.  Of course it worked flawlessly!  Within 15 seconds of me pushing play and having the YouTube video play, Owen was scurrying back and forth in front of the TV madly looking at his phone finally starting to read my texts and trying to dial me.  Here are a few shots of what I was able to grab before he called. 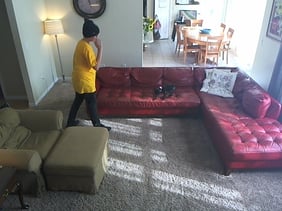 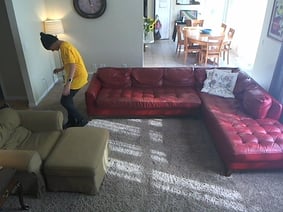 As soon as he called, I stopped the video and turned the system volume down to a tolerable level.  I answered his call on Bluetooth in the van so everyone could enjoy it.  They were watching over my shoulder and we were all laughing to the point of tears from his initial reaction.  The phone call was just icing on the cake.

“What the heck, Dad! Something is wrong with the family room TV!” he started, slightly out of breath from running down the stairs from his bedroom. I was initially tempted to have him describe the problem but the laughter that was filling the van would have given me away.  I told him to look at the TV screen and as I did he asked, “Are we getting bombed or something?” with the indifference of a 12 year old.   I assured him that everything was fine and that I was just trying to get his attention to respond to my phone calls and text messages.  Of course he thought it was overkill on my part. “Geez Dad, you didn’t have to give me a heart attack!” to which I responded,

“Actually I DID have to give you a heart attack to get you to respond.  How about next time you say you’ll stay in touch with us, you turn your ringer on?”

He agreed and we all had a good laugh about it when we got home that night.  For those keeping track at home, he chose to go out to dinner and hang out with Nana rather than join us for the softball game.

For anyone wanting to recreate this themselves, here are some relevant links.