What is the Difference Between Microsoft Dynamics NAV and GP?

Two groups of people frequently ask this question: Those that are new to Microsoft Dynamics 365 and those that are current GP customers. Each group comes to the question from a different perspective, so in this article, they will be dealt with separately. However, a few points we cover first apply to both groups.

The simplest answer is that there is not a lot of difference. Both systems do a solid job with accounting and distribution functionality. While feature for feature there are subtle differences, for an unbiased business leader seeking to differentiate, the differences are largely immaterial. So what does Microsoft say? The Microsoft roadmap for Dynamics product lines makes it clear that cloud-based solutions are where the bulk of Microsoft’s attention and investment is going to be made in the future. What requires a more nuanced reading is the specific direction for the former on-premise products, particularly Dynamics GP and Dynamics NAV.

For NAV, the answer is clear. There is no more NAV (or Navision for long-time fans). It is now called Microsoft Dynamics 365 Business Central. The roadmap for Business Central is also clear; Microsoft has extensive documentation detailing its release schedules and notes.

For Dynamics GP, the nuance begins to require reading between the lines. By following the docs and links provided by Microsoft, it is virtually impossible to find any mention of the product. Even if you start on the Microsoft Dynamics Business Central page and move backward to the SMB link or the general Dynamics 365 2022 release wave 1 plan, Dynamics GP is simply not included. 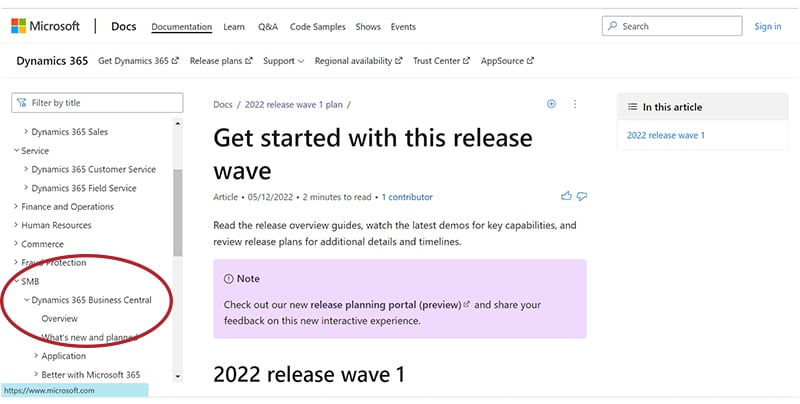 Therefore, while there is plenty of passionate discussion about the future of Dynamics GP, it seems clear from Microsoft's documentation that this product is not included in the long-term roadmap. Or so it may seem.

It may seem with Microsoft’s focus on the cloud and SaaS that GP, not being SaaS, would be discontinued. However, that isn’t the case for now. In October 2019, Microsoft announced its Lifecycle policy for GP. Microsoft would be dividing its versions of GP into two Lifecycle groups, Modern Lifecycle, and Fixed Lifecycle.

Great Plains users with version 2018.2 or newer, I have good news, there is currently no documented end in sight for support. Any Great Plains version 2018.2 and later falls under the Modern Lifecycle. With the Modern Lifecycle, You can download at least one of three updates released throughout a year to keep your system current and current on support. However, without a solid plan to make Great Plains cloud-based, the future of even the most current version is uncertain.

A Fixed Lifecycle consists of a determined time of Mainstream Support, followed by an additional period of Extended Support, and finally, Beyond End of Support. As you will see by the image below, all GP versions before 2018 are on the Fixed Lifecycle path.

Features of Mainstream Support include:

Features of the Extended Support phase:

Beyond End of Support

Here is where Microsoft ends almost all support for a given system.

Features of Beyond End of Support:

The Extended Security Update program lasts for a maximum of three years after the version’s Extended Support and only contains your system’s most critical security updates. 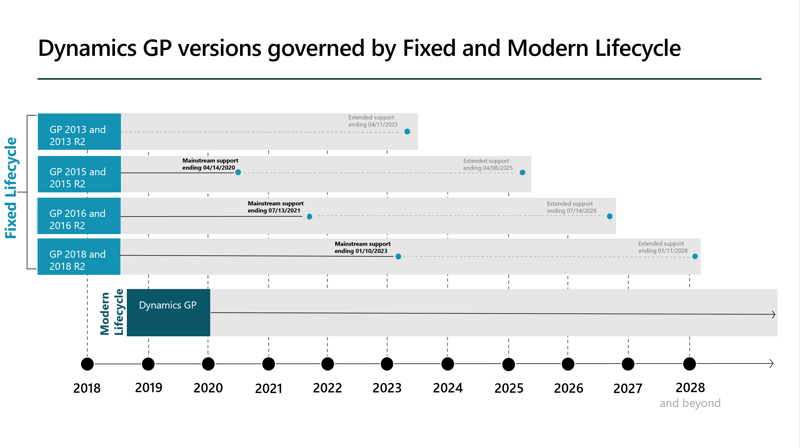 Image courtesy of Microsoft and can be found here.

Are You Currently on Great Plains and Looking To Switch ERPs?
Learn Why You Should Upgrade To Business Central Today!

So, What Does This All Mean?

What does this reality mean for prospective and current Dynamics GP customers? Let's see how it affects each group specifically.

If you have continued reading up to this point, then it is likely you have a strong interest in Microsoft Dynamics GP. So, the good news is you can still purchase this product. Microsoft has announced its continued Modern Lifecycle support for version 2018.2 and newer. More good news: you will be joining a large number of customers in North America with a strong user community. Dynamics GP is an ideal solution for firms whose primary needs are finance or distribution capabilities. While some light manufacturing does exist with Dynamics GP, it is very light and would not be a wise choice given the superior capabilities of Business Central. Furthermore, Dynamics GP could still be a good fit if you have members of your team that have deep experience with it or have a long-standing relationship with the partner from whom you would be sourcing the Dynamics GP.

As shown in the graphic above, versions of GP 2018 or older, Microsoft has on a Fixed Lifecycle with an end date in sight. So you will have to soon either update to a newer version of Dynamics GP or upgrade to Business Central.

Updating to a new version of GP will keep your system current and on the Modern Lifecycle. However, if you follow the investment or lack thereof, it is clear that Microsoft Dynamics GP is simply not a strategic part of Microsoft’s vision for the future. Microsoft desperately does not want a family fight, but it is clear they have picked the winner. For mid-sized companies seeking an end-to-end ERP solution, Microsoft Dynamics 365 Business Central is the platform of the future.

For a more complete list of its capabilities, you can visit the Microsoft product website. Microsoft Dynamics 365 Business Central is far and away the fastest-growing product line (in terms of new customers) in the lineup. More customer adds leads to more product investment, which in turn leads to an even stronger product. If it were my company and money, Microsoft Dynamics 365 Business Central would be the smart investment.

If you would like to discuss the differences between these two products, you can reach out to sales@innovia.com or call us at 800-834-7700. You can also check out this free whitepaper on Business Central vs. GP for even more insights.