My Journey to Innovia

If we haven't had the chance to meet, my name is Tim Britton, and I have the privilege of being the Marketing Manager here at Innovia Consulting. My role is to lead the day-to-day operations of the Marketing Team. This can include anything from planning the Customer Conference to editing our Innovia Conversation podcast or revising content from our talented Innovia team. Since most people haven't had the chance to hear my story, I wanted to share some anecdotes from my past that shaped me into the role I am in today.

Since my early childhood, creativity has been one of those breakout characteristics that defined my personality. I am the second oldest of five, and we were homeschooled through high school graduation. Since we spent much more time together than most siblings, I took it upon myself to entertain my younger siblings and myself. That took the form of creating games, adventures, shows (more on that in a bit), and myriad other activities.

I remember our family getting a large box of continuous stationery (or, as I remember it, the fun paper that you got to tear the ends off), and I used a fair amount of it to create my comic strips. I remember telling my parents I wanted to be a comic stripper when I grew up. After some clarification and a round of laughter from my parents, I was informed that cartoonist was the job I was seeking. I had two cartoon strips, one called "The Britton Adventures," which was a strip based on my family. Second, I had a strip called "Short But Funny," which was a single-panel cartoon similar to what you see in "Ziggy" or "The Family Circus." I had kept these comics until about middle school when I revisited them and realized they were not funny, and I couldn't draw. Years later, I realized I had a knack for graphic design at my first internship. So many of the graphics you have seen from Innovia since late 2017 were things that I had created. Today's graphics are a mixture of my creations and work from Joe Hektor, our Marketing Specialist.

Fast forward to my middle school/ high school years, and my interests shifted from cartoons to the extravagant world of TV. I am a big fan of comedy and have seen many shows, from current hits to older gems. I created and branded my television network, called the Tim Channel. And ironically enough, I rebranded to Tim TV, as I thought that was a catchier title for my audience of three. 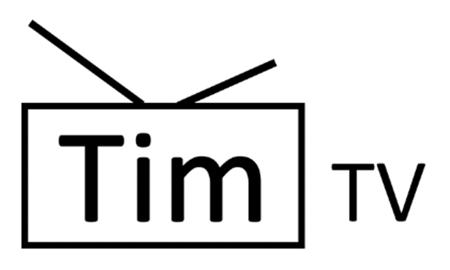 Recreation of the Tim TV Logo

I created several series, and a few of the main ones are detailed below. All of the main characters were performed by me, with occasional guest appearances by my siblings. Though I had some of the capabilities, I never recorded any of these performances (and for the record, I have no regrets about that).

These experiences from my formative years stayed with me, but I remember going into college orientation with the plan to major in Accounting. During orientation at my alma mater Indiana University South Bend, I was sitting in a meeting where they introduced the majors within the Business School. And I remember thinking the Marketing / Advertising sounded interesting. After thinking about it and discussing it with my family, I decided to major in Marketing and Advertising. I enjoyed it and could, for a company, channel that creative energy that I had previously utilized for my siblings. I also discovered that I was pretty good at it and graduated with honors among the top 2% of the business school.

Finding Innovia was a case of being in the right place at the right time. I was at IU South Bend post-graduation and was walking/reminiscing with a friend of mine, and we ran into one of our Marketing Professors. He had recently talked with Tom Doran and was looking to build a Marketing Department at Innovia. I went in, interviewed for it, and got the job!

So, there you have it, the abridged story of how I got to Innovia Consulting. I hope you enjoyed reading my story and, more importantly, have benefited from the efforts marketing puts forth daily to help you and your company get the most out of your partnership with Innovia.